The HMP provides different network interfaces that can be accessed via HTTP when the player is connected to the network and properly configured - see how to get started with the player. 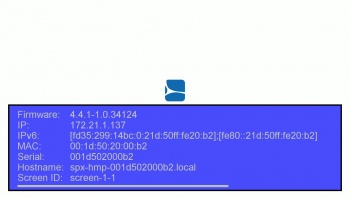 A player can present one or more IPv6 addresses:

The following are secure methods to access a player behind a NAT router / firewall:
The following methods are also possible, but discouraged because they would allow incoming connections from the public Internet and thus expose the players to Internet attacks such as DDoS (distributed denial-of-service), password cracking, or make it easy to exploit any security vulnerabilities.
Retrieved from "https://support.spinetix.com/w/index.php?title=Network_access_on_HMP&oldid=17891"
Categories:
This page was last modified on 27 September 2022, at 20:50.