The players are adverting their network services and presence information through two protocols:

Elementi is using the information advertised by the players through any of these two protocols to list the players under Devices tab in Browse panel. If device discovery doesn't work for any reason, the players can be manually added into Elementi.

Both services are using multicast packets, which are restricted to the local area network where the players are located (thus the PC running Elementi must be in the same LAN), might get discarded on WiFi network (especially when crowded) and don't work over VPN connection.

Universal Plug and Play (UPnP) is a set of networking protocols that permits networked devices, such as SpinetiX players, personal computers, printers, Internet gateways, Wi-Fi access points and mobile devices to seamlessly discover each other's presence on the network and establish functional network services for data sharing and communications. 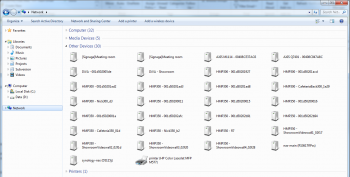 UPnP discovery protocol, known as Simple Service Discovery Protocol (SSDP), accomplishes the advertisement and discovery of network services and presence information without assistance of server-based configuration mechanisms, such as DHCP or DNS, and without special static configuration of a network host.

SSDP / UPnP removes the dependency on Bonjour name resolution as IP addresses are used to contact players discovered via UPnP. Furthermore, HMP400, HMP350, HMP300 and DiVA players show up in the Windows Explorer's Network view in Windows computers when Network Discovery is enabled.

UPnP uses UDP port 1900 and all used TCP ports are derived from the SSDP alive and response messages.

The HMP advertises the following services using Bonjour (via mDNS):

The device name is the name of the device as configured in Control Center.

Discovery from a web browser is simple if a Bonjour finder is installed (native with Safari). For instance with Internet Explorer open the Bonjour tab, all the HMP devices in the local network will be listed as "HMP - _device name_".

If the Bonjour finder is not available then one can just type spx-hmp-_serial_number_.local. (e.g., spx-hmp-001d5000001a.local.) in the URL bar of the browser, this should open the device's Control Center.

If the Bonjour service is installed one can use the command line dns-sd tool to browse the local network.

To look up a particular HMP device type (replace instance name by the name returned using the -B option). It will return the device address as spx-hmp-_serial_number_.local

Retrieved from "https://support.spinetix.com/w/index.php?title=Device_discovery&oldid=16365"
Categories:
This page was last modified on 1 July 2020, at 12:50.