Activation of the debugger

Once enabled, there are three ways to enter the debugger:

Note: the debugger must be enabled before opening the document to be debugged. 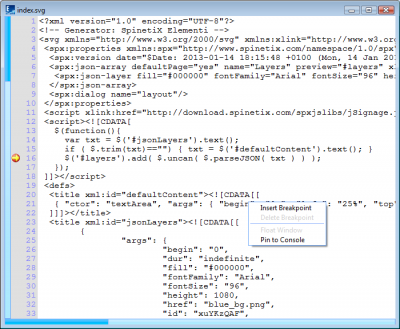 To view the source code of a script and set breakpoints, either

Note that source code windows may open automatically when stepping through the code, in which case they will always open first as tabs in the developer console, but can be floated thereafter if needed.

To set a breakpoint, left-click in the gray margin on the left side of the source view (where the line numbers are shown). The breakpoint will be materialized by a red dot. Alternatively a breakpoint may be set by right-clicking anywhere on the line and selecting the "Insert breakpoint" option.

Stepping through the code 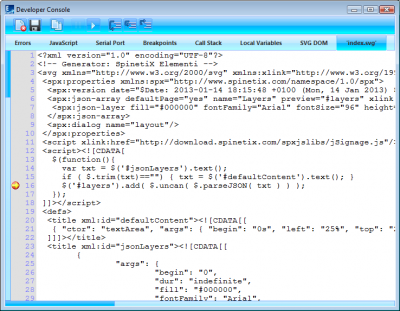 When the breakpoint is reached, the developer console switches automatically to source code window and shows the current line, also known as the "program counter", with a yellow arrow.

It is then possible to step through the code with the step and next buttons:

To exit the debugger and let program execution continue until the next breakpoint or exception, click on "Continue" or hit F5.

If the program seems to be running in an infinite loop, it is possible to enter the debugger at once by clicking on "Break". This will break into the debugger on the next JavaScript instruction. If no JavaScript code is executing when "Break" is clicked, the debugger will be entered at the first instruction of any script executed thereafter.

When the program is stopped by the debugger, it is possible to examine the call stack, that is the list of successive function calls that lead from the root script to the function that is currently executing.

It is possible to double-click on any of the function calls in the call stack view to examine the corresponding stack frame:

By default the top stack frame is selected, which is the one which triggered the debugger.

Below is the source code used in this example. 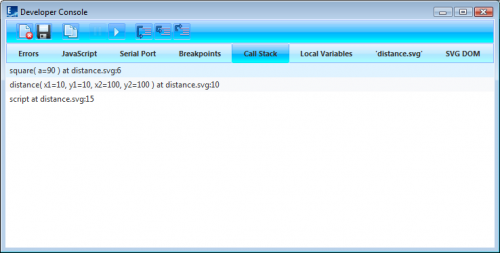 To see the local variables of a script or function, switch to the "Local variables" view. It contains a list of all variables in the current scope and their current value.

Some variables are objects, which will be indicated by an expander arrow to the left. Clicking on the arrow expands the view to list the properties of the object. For examples, in the screenshot on the right side, the "event" object in the local scope has been expanded to show its properties.

There may be any number of levels in the scope chain, which ultimately is terminated by the "global object", i.e. the object which holds the global variables, which in SVG is of class "SVGGlobal".

In the sample code below, a timer is installed which causes an unhandled exception to be thrown after two seconds when it tries to use the undefined variable "z". On the screenshot of the local variables view, we can see that the local scope of the callback contains the "event" parameter, the "this" pointer and the "n" local variable. We can see also that there is a closure in the scope chain, with the local variable ("x", "y" and "timer") of the delayOperation() function in which callback() was defined. Finally we see that the last object in the scope chain is the "SVGGlobal" global scope. 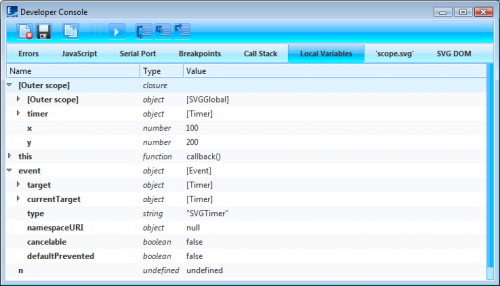 The debugger can show the current state of any XML fragment and of the rendering XML tree.

A breakpoint is set inside the textAreaWithBackground() function, just before it returns (see image 1). This function builds a new XML fragment. When the breakpoint is hit, the local variables tab will show that the variable named "g" is a native object of class SVGElement pointing to a <g> XML element.

If we click "Continue", a second breakpoint is hit just after the point where the fragment is inserted into the main rendering tree. A dump of the rendering tree is always available in the developer console under the SVG DOM tab. By switching to this tab, we can see that it now contains the fragment.

Below is the source code used in this example.

Retrieved from "https://support.spinetix.com/w/index.php?title=Developer_Console&oldid=16938"
Categories:
This page was last modified on 16 October 2020, at 10:40.