This page is related to the built-in apps of the player web interface. 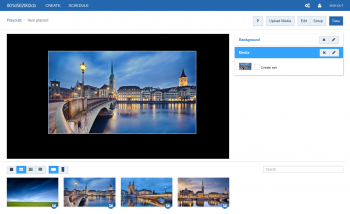 The Media app can be used to display one or more images and videos for instant visual impact.

To add an image or video as background, simply drag and drop that image or video from the media pane at the bottom or from the File Explorer (the file is first uploaded onto the player's media gallery). You can also create a media set for which you can change the items' order and duration and choose among a variety of transitions.

See also the Background app, which is a special version of the Media app, set to fit the entire screen.

To toggle the app properties' pane, click on the app name on the right-side of the Content Playout.

This is the default behavior of the Media app.

To add an image or video as background, simply drag and drop that image or video into the Playout preview pane either from the media pane at the bottom or from the File Explorer (the file is first uploaded onto the player's media gallery). It is also possible to use the "Upload Media" button at the top of the window. 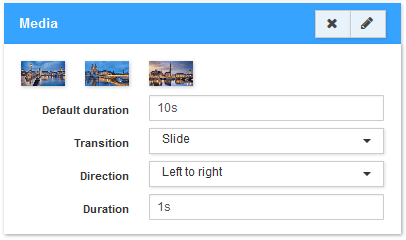 The Media app also supports displaying multiple media - for that, click the "Create Set" box so that any media dropped (or uploaded) onto the app, will be added to the set, as opposed to replacing the current media.

To further customize the media set, click the edit button (pencil) - this opens the Media set edit page, from which you can:

The top buttons can be used to:

At the bottom of the page the Media view can be used to: 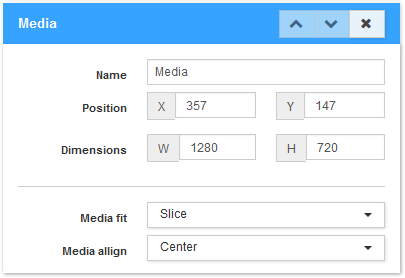 Note:
Apps can be freely positioned anywhere in the Playout edit zone as long as it does not overlap other apps. Overlapping apps are show in red and the OK button is disabled - they must be moved or resized to re-enable the OK button.