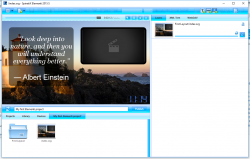 This purpose of this tutorial is to help the user to build his first Elementi project (and to get familiarized with the interface in the process). The project is composed of a static image in the background, a video and digital clock.

You can download the project resulted after following this tutorial from the link below, but note that the video file was not included in the 7z archive available for download.

In case Elementi is not installed on your PC, download the software and install it on your PC. For more details, see the Elementi page.

The Elementi interface is divided into 3 panels: 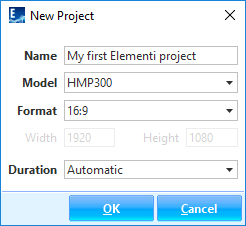 The first step is to create a new project and set its name, model, format and duration.

Once the project has been created, double-click on its icon to open it. 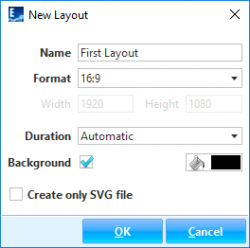 The next step is to create a new Layout to work on the content.

Once the layout has been created, it is ready to be edited.

The next step is to import some media content (images, videos) into the layout. To do so, simply drag and drop the files from Windows Explorer into the browse panel.

Once the files have been imported, we can start using them into our layout. 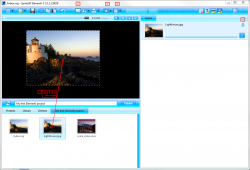 Next, let's set the image as a background layer. For that, simply drag & drop the image from the browse panel into the preview panel (or into the edit panel) to create a media layer.

At this point, another problem might appear - if the image aspect ratio is not the same as the one selected for the project (in our case the image is 4:3 and the project is 16:9), then some black borders are still present around the image.

Finally, to ensure that the background layer is not moved by mistake within the preview panel, lock the layer by clicking on the "Lock" icon within the edit panel. 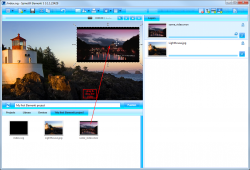 Next, let's add the video imported before into our layout - for this, drag and drop the video from the browse panel into the preview panel somewhere on top-right area.

If the video is not at the desired position, go with the mouse over the video (the regular cursor turns into a 4-arrow one), then click and drag it to the desired position. If necessary, resize the video layer by going with the mouse over the bidirectional arrow icons (the cursor turns into a matching 2-arrow cursor as well), then click and drag until you get the right size. 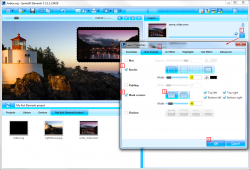 Set the box format properties of the video layer

Optionally, we could add a small rounded border around the video. To do this, follow these steps:

Just as before, to ensure that the video layer is not modified by mistake within the preview panel, lock the layer by clicking on the "Lock" icon within the edit panel.

Note: Elementi remembers any change you do on your document (as long as it is kept opened and even after saving it), so you can always revert a change using the Undo & Redo buttons from the toolbar. 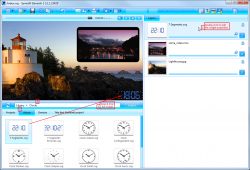 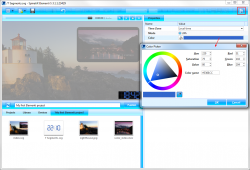 Next, let's add a clock into our layout. To do this, simply drag and drop one of the clock widgets from Elementi Library into preview panel or edit panel.

For this tutorial, we are going to import the "7 Segments" digital clock widget. Once the clock layer appears within the preview panel, position it on bottom-right area and resize it accordingly.

To edit the widget properties, double-click on its layer within the edit panel.

Optionally, you could modify the properties available for this clock widget, for instance:

To go back to the index layout, click on the "Back" button from the toolbar (right side).

You could also lock the layer to prevent further changes within the preview panel. And don't forget to save the changes done so far. 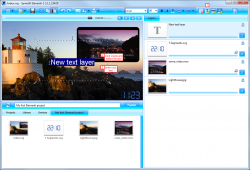 Next, let's add some text on our layout. 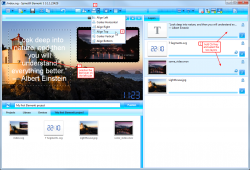 Position and align the text layer

Next, move the mouse over the layer border (the cursor changes into a 4-arrow cursor), click and drag to position the text layer on the left side. Resize it if necessary and then top-align it with the video layer.

To be sure that two layers are correctly aligned, do like this: 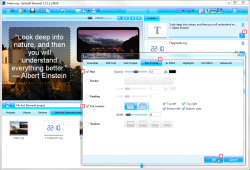 Set the box format properties of the text layer

Some white text over an image doesn't look so nice, therefore the next step is to make the text stand out. For that do the following: 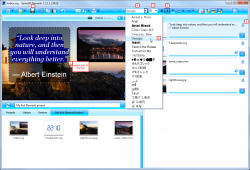 Optionally, you could select enhance the text by changing the font and the style used:

Don't forget to lock the text layer and the save the changes done so far.

Finally, we need to add the layout into the project master file.

This step requires an HMP device.

To display our project on the screen, we need to publish it to one or more HMP devices as described on "Publishing from Elementi" tutorial.

Note:
Once the project has been published to the HMP, you can close Elementi and even shutdown the PC used to create the project, because the HMP is playing the content from its internal storage.

The next tutorials to study after the one presented on this page are:

Retrieved from "https://support.spinetix.com/w/index.php?title=My_first_Elementi_project&oldid=18038"
Categories:
This page was last modified on 9 January 2023, at 11:28.