Jump to: navigation, search
The SPP Studio application has been deprecated and it will no longer be maintained. 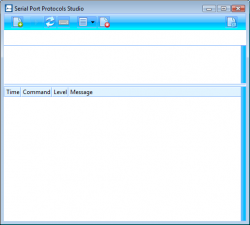 Note that SPP Studio does not allow editing the protocol file, so you will need an external XML editor for that.

In order to work with protocol files, you need to perform the following operations: 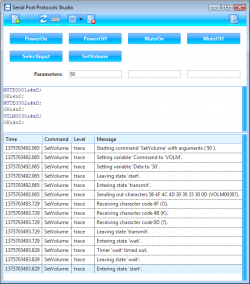 Depending on your protocol file, a different set of commands will be shown in the SPP Studio interface. SPP Studio will add a command button for each <onStart> element present inside the "start" state element.

For instance, the following file will lead to the set of commands shown in the image on the right:

Pressing any button is equivalent to sending the command using the sendComPort() JavaScript command on the HMP.

The example in the snapshot shows the dialog between the PC and a Sharp Aquaos when the user presses the MuteOn, MuteOff and SetVolume button (with an input of 50 for the volume).

For instance, the effect of the "SetVolume" command is shown in the snapshot image.