This page is related to Interactivity.

Motion detection is the process of detecting a change in the position of an object relative to its surroundings or a change in the surroundings relative to an object. A motion detector is a device that detects moving objects and is often integrated as a component of a system (security, automated lighting control, home control, energy efficiency etc.) that automatically performs a task upon motion in an area, such as: alert or alarm triggering, activate a camera to capture an image or video, or pass this information to the HMP to update the content on the screen accordingly. 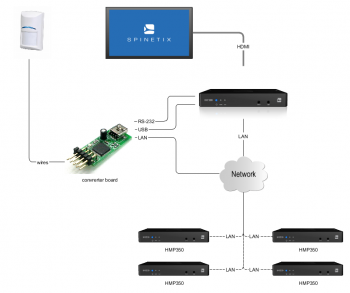 Passive infrared (PIR) sensors are sensitive to a person's skin temperature through emitted black body radiation at mid-infrared wavelengths, in contrast to background objects at room temperature. No energy is emitted from the sensor, thus the name passive infrared.

Most PIR units have some sort of dry contact (wire contacts or electrical relay) to connect them to light or security alarm, for when motion is detected. The HMP does not have a dry contact connector, so you need to use the PIR in conjunction with an additional device (converter) that converts the dry contact switch into an output message toward the HMP.

Here are some examples of such converters:

Note:
The HMP receiving the trigger message from the converter, can inform other HMP devices about that event through the Shared Variables mechanism. 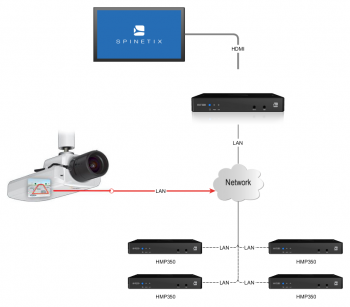 Most network cameras can come equipped with video analytics applications that can detect motion in its field of view and send alerts, including informing the HMP whenever movement starts or stops in the camera view. This solution is particularly attractive when the intent is to record video triggered by motion detection, as no hardware beyond the camera is needed.

Since the observed field may be normally illuminated, this may be considered another passive technology. However it can also be used together with near-infrared illumination to detect motion in the dark, that is, with the illumination at a wavelength undetectable by a human eye.

For more details about this subject, see Motion detection with Axis cameras page.